Story of a fishing trip in Eeyou Istchee Baie-James

Beyond the 50th parallel north, lies a vast territory interlaced with virgin lakes teeming with life, their crystal-clear waters mirroring an untouched purity, preserved from human overuse. The Nibiischii Corporation safeguards this majestic land by managing the largest wildlife reserve in Quebec, namely the Albanel-Mistassini-Waconichi (AMW) lakes and the Assinica National Park Reserve. The Mistissini Cree Nation, via the Corporation, maintains recreational fishing in a way that is sustainable and respectful of the fauna, the natural habitat and Cree traditions. 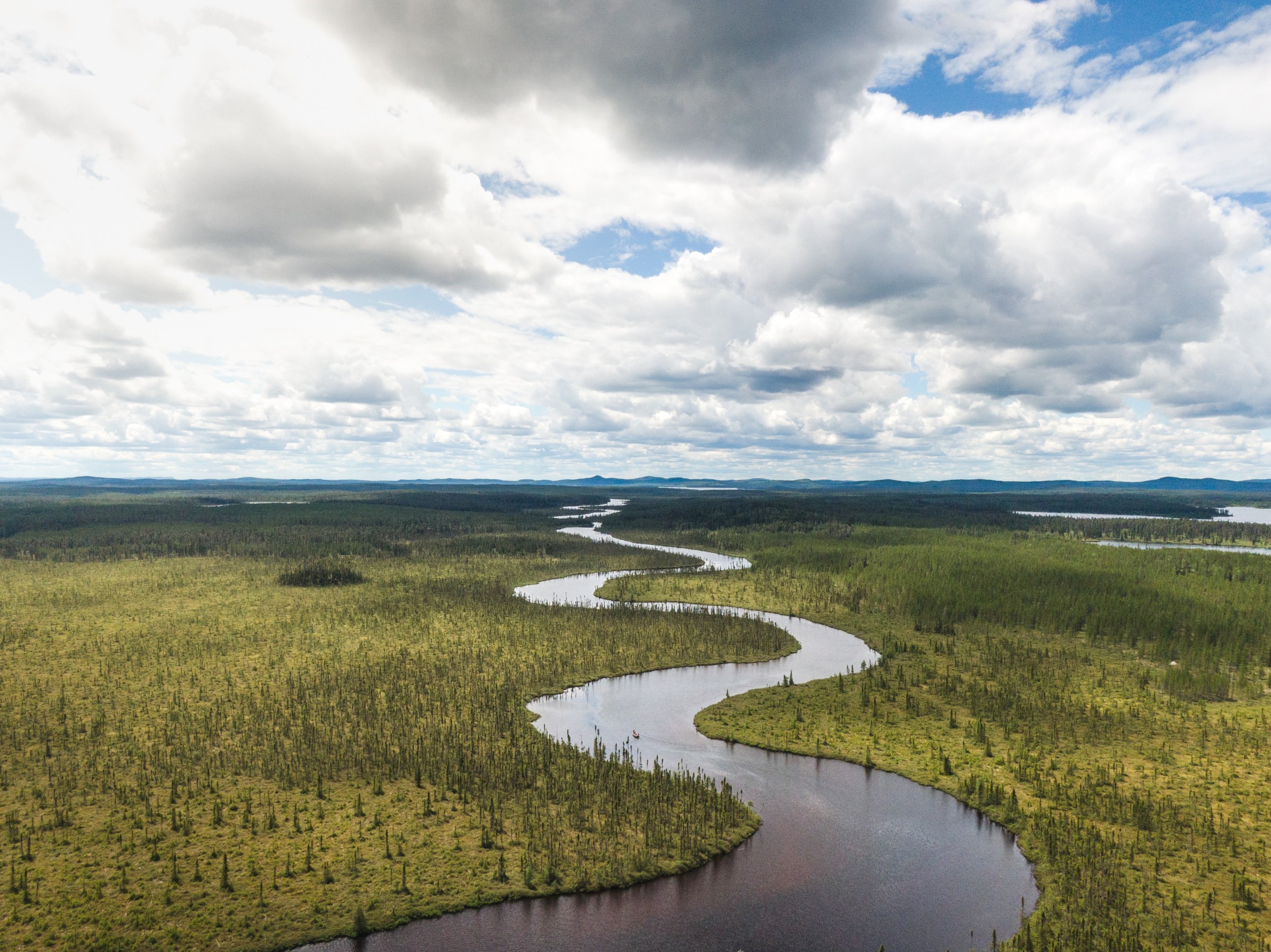 Where Route 167 ends in the north, immensity begins. Hundreds of miles of gigantic rivers, a myriad of lakes of all shapes and sizes of the likes of Mistassini, Albanel, Waconichi or Robineau. The wildlife reserves span over 25,000 km2 and counts over 5,000 lakes. Nibiischii Corporation employees as well as Cree master trappers and their families share useful insights with visitors to enrich their fishing, canoeing and camping trips. Stanley Mianscum is one of those master trappers who knows the land like the back of his hand. He is the local representative of the Cree Trappers' Association (CTA), an association that promotes, protects and preserves the way of life, values, activities and traditions of Cree trappers. Since time immemorial, the Cree Nation has skillfully maintained traditional fishing in the waters that abundantly grace these lands. Through an innate respect of nature, the region's Indigenous peoples have instinctively maintained the ecological balance of the natural habitats and fish populations. This approach is passed on from one generation to the next to ensure distribution equity and sustainability of the natural resources for the community.

“First Nations have been living here for countless generations and are at the front row in understanding the delicate ways in which humans and nature are connected.”

It is a rare honour to be able to access these precious ecosystems, which thrive on a harmonious, timeless coexistence with the lands' protectors.

To further protect the natural balance, the Mistissini Cree Nation has collaborated with Concordia University to set up a program to monitor the health of fish populations. The program leverages the contribution of Mistissini Cree anglers and recreational fishermen to build a large-scale inventory. “For years, the Mistissini Cree Nation has been conducting studies on the various fish species to ensure the health of these populations for future generations through careful monitoring and management. By combining local Cree insights and scientific research, the studies integrated several perspectives that gave a more thorough understanding of the fish populations and their habitat,” explained Pamela McLeod, Local Environmental Administrator from the Cree Nation of Mistissini. By exchanging information on any changes observed in the lakes of the territory such as water quality, fish quantity, size or species distribution, it was possible to determine whether an ecosystem needed rebalancing and to allow a specific resource to have time to regenerate. Thanks to samples from Indigenous anglers, it was observed that lakes under the 51st parallel north yielded smaller fish than lakes further above. This can be linked to the fact that the lakes south of the parallel are easier to access by locals and visitors, whereas lakes beyond are more remote and less fished.

Like anywhere else, measures are necessary to preserve fish populations. Bigger fish are genetically more resilient, lay more eggs and are hence vital in rebuilding stocks. Local anglers are very much aware of these data and avoid overexploiting by taking only what is needed for sustenance over specific periods during the year and according to limiting criteria such as fish size, mating season per species, quotas and by alternating lakes to allow fish to regenerate. Despite all this, fish populations are decreasing in three southern rivers. This is likely due to environmental factors, climate change and variations in the water temperature.

The remote lakes in the area are blessed with crystal-clear waters that teem with various fish species: “mâsamekus” (brook trout), “ucimâw” (northern pike) and “ukâw” (walleye). These species are not shielded from the risk of being overfished. Unlike traditional fishing, new fishing techniques and modern equipment could disrupt the balance. This is why local anglers still prefer the good old fishing rod which allows for a fair fight between the two parties. When sustenance is not at stake, like in sport fishing, putting the fish back in the water is a valid option. Within wildlife reserves, quotas apply for each water body and have to be followed to keep fish populations healthy and preserve quality fishing. From the data collected on catches, quotas are reviewed annually by Quebec's Ministry of Forests, Wildlife, and Parks.

MATHIEU AND THE GREAT UCIMÂW

From a conservation and traditional perspective, fly fishing and releasing the catch is the best option. This technique, however, is not often used for catching pike. Embarking on a Nibiischii fishing adventure in late June, our protagonists Mathieu, Juliette and Fred were dubious about catching a big northern pike with fly fishing.

Led by Mathieu, the group first left Quebec City in the early morning. It was their first time north of Chibougamau and as they traveled over unending miles, the landscape gradually changed until they were surrounded by boreal forest, a breathtaking and unique environment. At midday, the group reached a tiny village on the shores of Lake Waconichi. Several cottages there look out to the lake and serve as basecamp for daily fishing trips.

“Fly fishing pike is quite the challenge; you need a variety of gear to adapt to prevailing conditions.”

"You have to take everything into account: the water level, the period, the time, the habitat,” pointed out Mathieu as he and his team began their quest. They started their first day without a guide as they looked for these “freshwater sharks”. The water there is so clear that you can see everything, but the Esocidae are wise. One must anticipate their movements and align one's position to catch a pike. The group's high expectations were not met on the first three days. Despite some interesting catches, the monster fish remained elusive. On the fourth day, some took the bait but resisted capture. The group decided to split to cover more ground, only to hear Fred shout from his boat. They found him struggling with his fishing rod and were quick to capture the moment on film. The result: a first catch worthy of the quest with 42-43 inches of monster fish! The angler's dream! The team became all smiles.

On the next day, the group headed out for Lake Robineau, a two-and-a-half-hour ride from Waconichi via the North Road. The northern landscape became more apparent. 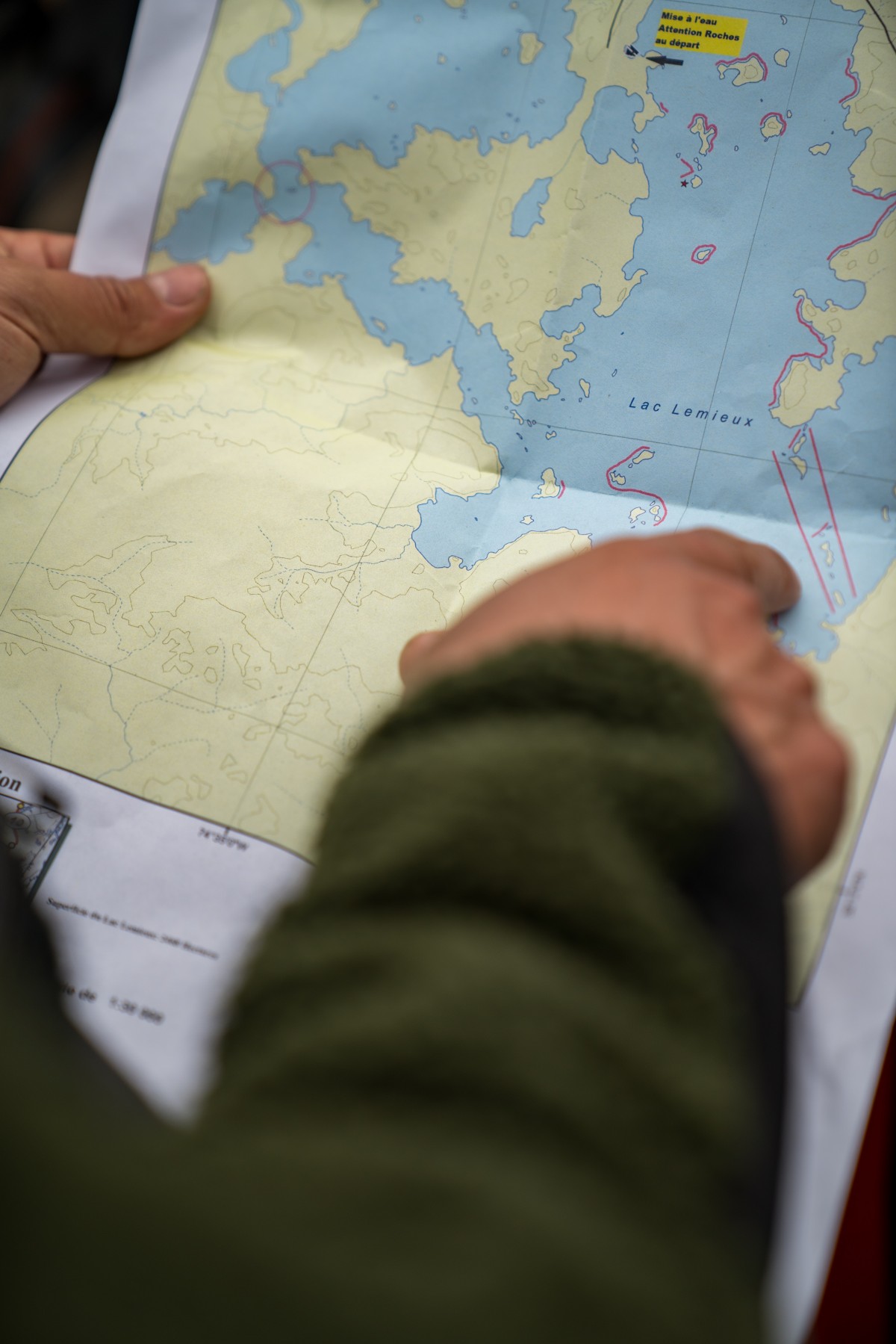 “It's a more remote lake, on a tough road and within an exclusive territory. Mathieu realized how lucky they were to be on such a spot, graced with such an amazing view on Lake Robineau.”

The group studied the new terrain and set up a strategy, taking note of all the details to enhance fishing on the following day. They spotted schools of walleye, which is a biomass indicator of pike. They had even caught and released some of the walleyes near a connecting river.

The next morning, the group caught several walleyes and many spotted northern pike. “We could see them nibble the bait,” said Mathieu. At midday, they decided to split their efforts. Juliette and Fred managed to catch several big pikes. Mathieu was on his own to fulfill his quest for a 43-inch monster fish. He returned to a deeper part of the lake that he had noticed earlier on. His boat hit a shoal, spurring a very big fish into charging his bait and biting it at the perfect angle. The struggle that ensued was also caught on film, luckily for Mathieu as he exclaimed: “It's a 45-inch monster fish. The biggest pike I've ever seen!”.

The last day on the AMW wildlife reserve fulfilled all fishing and adventure expectations. Each angler had caught a massive northern pike. The group vowed to come back as often as possible. Mathieu's spectacular catch will be etched forever in memories.